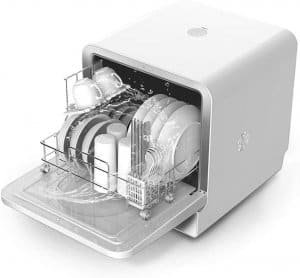 Dishwasher is an essential parts of our daily life, every day some things are very much inevitable in our little life, such, eating, bathing, toileting etc.

A waterless dishwasher – is it possible to wash dishes and cutlery without water and less damaging detergent?

This is a most interesting question, especially today where natural resource protection and eco friendliness is a major target in all aspects of life.

It sounds a bit like “back to the future” really, but it is indeed an already existing technology, developed and designed in 2004 at the University of New South Wales in Sydney, Australia.

This project even won the Electrolux Science Lab Award in the same year, and Electrolux considered it possibly to put it into mass production. Up to now we are still awaiting the waterless dishwasher.

Cleaning with highly pressurized CO2 is used under industrial circumstances. It would be not only interesting for the average household where it could be part of a whole cleaning unit, but also NASA finds this technology interesting to solve cleaning issues in crewed spaceflights.

The washing system uses carbon dioxide in a closed loop. It is stored in containers similar to propane gas containers used at the countryside, for camping, onboard etc.

Carbon dioxide is being put under pressure at room temperature and becomes a fluid character. This fluid is a very good fat solvent that binds grease and oil remains very well. Unlike water it does not have a surface tension, so it will spread over any surface without the need of being sprayed on with pressure.

There are still detergents required, which are generally more environment friendly and needed only in much smaller quantities compared to when washing with water.

Electronic devices are probably being less damaged and this would obviously lessen the need of repairs.

After finishing the washing cycle, dirt and CO2 get separated in a CO2 –grease- separator unit.

The precipitated grease and oil will be disposed directly into the household sewage system; the CO2 is being re-stored in the container.

This waterless dishwasher prototype washes very quietly because there is no need for spray arms or a water pump system.

The design itself is stunning: it reminds you on “rock pools” and the interface is no longer the conventional built-under or portable box-like appearance of a traditional dishwasher.

The designers and inventors of the first waterless dishwasher or Rockpool unit (as it is called), have got the vision of an integration into the kitchen work top, a very practical design idea.

The portable dishwashers are easy to move from one place to another because of having casters with the facility of countertops.

The Inside Story of Free Standing Dishwashers