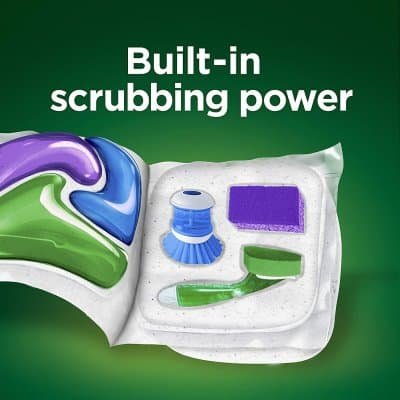 Dishwasher detergent pods have become increasingly popular with consumers due to the convenience and efficiency they offer. Compared to liquid dishwasher detergents, pods are compact and easy to use, as well as typically more cost-effective. Not only do these small packets of detergent save time in the kitchen, but their benefits also extend beyond convenience.

Aside from being easy to store and use, dishwasher detergent pods are formulated for optimal cleaning power when washing dishes in a machine. The concentrated ingredients provide powerful dirt and grease removal without leaving behind any residue. Furthermore, their premeasured amount of concentrated soap eliminates the need for measuring out liquid detergents or worrying about using too much soap in each cycle. This not only saves time but money as well since you avoid wasting detergent from overuse or underuse of product.

The debate between liquid detergents and dishwasher detergent pods has been happening for years. But what are the benefits of liquid detergent in this situation? Liquid detergent is a great choice for those who want to get their dishes clean without too much hassle. It’s easy to use and can be used with many different types of dishwashers, making it a great option for anyone looking for an effective cleaning solution.

Liquid detergent also offers some advantages over dishwasher pods. For starters, it is more cost-effective, since you don’t have to buy pre-packaged packets of powder or tablets. You also have control over how much you use each time, so you can adjust the amount depending on the size and load of your dishes.

Dishwasher detergent is an essential part of maintaining the cleanliness of your dishware. The two main types of dishwasher detergents are liquid and pods, but which one is more cost-effective? To help you decide, let’s take a closer look at the cost comparison between these two options.

Liquid dishwasher detergent is generally cheaper than its pod counterpart; however, it can be difficult to measure out the proper dosage for each use. This means that you could end up wasting product if you add too much or not enough detergent to your dishes. Additionally, liquid detergents often have harsher chemicals than pods and may require more frequent replacement due to their shorter shelf life.

On the other hand, dishwasher pods are generally more expensive than liquid detergents but they offer convenience by taking away the guesswork in measuring out a dose.

Dishwashing detergents come in a variety of forms, from traditional powder and liquid to the more recent introduction of dishwasher detergent pods. With so many options available, it can be difficult to decide which one is best for your needs. To help make this decision easier, we will be comparing the performance of both dishwashing detergent pods and liquid when used in a standard residential dishwasher.

When it comes to overall cleaning power, liquid dish soap is generally considered to be the most effective option. This is because liquids have more active ingredients than pods and are able to penetrate deeper into soil particles for better removal. Additionally, liquid soap can often provide better grease-cutting power than pods due to its higher surfactant content.

Dishwasher detergent pods have become increasingly popular over the past few years as an alternative to traditional liquid dishwashing detergent. While both products are effective for cleaning dishes, there are significant environmental impacts associated with each.

When it comes to liquid dishwasher detergents, the plastic containers they come in can take centuries to breakdown. They also contain chemicals that could potentially leach into soil and water sources if not disposed of properly. On a positive note, this type of product is usually biodegradable and non-toxic when mixed with water, making them less harmful to the environment.

In contrast, dishwasher detergent pods are highly concentrated and made from pre-measured portions that dissolve during washing. However, since these products often contain synthetic fragrances and other chemicals that are hazardous to aquatic life, their use must be carefully monitored.

Dishwasher pods are an increasingly popular choice when it comes to dishwasher detergent, and they offer several advantages compared to traditional liquid detergents. The convenience of pre-measured single-use pods is one of the main reasons why many people prefer them. There’s no need to measure out the right amount of liquid or try to pour it into a tiny cup without making a mess – just pop in one pod and you’re done! Additionally, there are fewer chances for spills, splashes, and messes with pod detergents than with liquids.

Another advantage of dishwasher pods is that they dissolve more easily in water since they have already been pre-dissolved before packaging.

Dishwasher detergent pods, also known as packs or tablets, offer convenience when it comes to doing the dishes. However, this type of dishwasher detergent does come with some drawbacks when compared to liquid detergents. One disadvantage is cost – many users find that pods can be more expensive than traditional liquid dishwashing detergent. Furthermore, those on a budget might find that they do not get the same number of loads per container as they would with a liquid product.

Another issue with using dishwasher pods is the potential for over-sudsing. This may occur if too many pods are used in one cycle or if they are not completely dissolved before being added to the water inside the machine. Additionally, users have reported finding residue left on their dishes after using this type of product which can be time-consuming and difficult to remove.

Liquid dishwasher detergent also works well with most water temperatures, so you won’t have to worry about having to adjust the temperature of your water during a wash cycle. Additionally, liquid detergents can be used on any type of dish material, including glassware and plastic dishes that may not be suitable for use with some pod varieties.

The debate between dishwasher detergent pods vs liquid has been a topic of discussion for many years. Liquid dishwasher detergents, while they have some advantages, also come with some drawbacks that you should be aware of before choosing one as your go-to method of cleaning dishes.

One disadvantage is the cost. The price per load when using liquid detergent can be more expensive than using pods or tablets. This is because liquids tend to contain more chemicals and additives than other forms of detergents which can drive up their cost per use. Additionally, because liquids are often sold in large containers, it can require a significant upfront investment in order to obtain the amount necessary for several months’ worth of cleaning sessions.

Today, dishwasher detergent pods and liquid dishwashing detergents offer a wide variety of options for consumers. Pods are convenient and easy to use, but they may not be the best choice for everyone. Liquid detergents may be more cost-effective in the long run, plus some users find them easier to measure out when needed. Consider what is important to you before making a purchase decision.

Pods can be beneficial if you want mess-free convenience or if you simply prefer the single-use approach. Some people also find that pre-measured amounts help control how much product is used each wash cycle. On the other hand, liquid detergents may be better suited for large households or those who don’t like wasting materials due to the overuse of pre-measured pods.