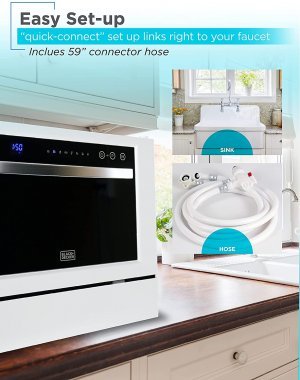 Today almost every house is having devices like a furnace, air conditioner, and hot water heater; and when it comes to cutting down on utility costs most people don’t think about dishwashers.

Because most people even don’t know how much electricity a dishwasher use. This effective device does use a fair amount of energy, and the reason for this is,

That its main by-product is heated, which takes a significant amount of power to generate. Let’s put some light on this topic and discuss in detail how much electricity a dishwasher use.

Do Dishwashers Use Lot of Electricity

Many people prefer to clean their dishes in a dishwasher as it saves their time. And the most common question that they have in their mind is ‘do dishwashers use a lot of electricity?’

There is no particular answer for this as it depends on multiple things, like how much you run it, the cycle you pick, and more importantly the time of day you load, and lastly your contracts with your energy supplier and the model of your dishwasher.

Most dishwashers usually use between 1200-2400 watts and a regular dishwasher uses only about 1800 watts per cycle it’s approximately the same energy used to power a hairdryer for a few minutes.

The dishwasher uses the electricity only on the control electronics and the pump. The dishwasher is normally attached to the hot water line so the heating of the water does use energy. So, the dishwasher doesn’t work to heat the water.

To know exactly how much your dishwasher costs to run, you have to know many things like how many watts your dishwasher needs, how many hours you are using it, and the cost you are paying on average per kilowatt per hour.

If you have a reasonably energy-efficient dishwasher that is certified as being energy-efficient, then you can say that you’re not using much energy. Dishwasher energy consumption also depends on the model you use.

Normally the dishwashers hide their true energy consumption as the device doesn’t literally use very much in the way of electricity itself.  If the device has its own onboard heater then it would take much energy, as it adds quite a bit to its power demands.

Most dishwashers usually get away with a very low profile as they ride along with another one of your household devices for as much as half of its energy consumption the hot water heater.

To work efficiently the dishwashers need to get-hot water and that water has to come from somewhere.

The dishwasher’s total energy consumption can be counted by the gas or electricity that the water heater needs to supply the dishwasher.

After getting the above estimates as a general guideline it’s difficult to say how much energy a dishwasher uses because the amount of power your model is using will generally differ depending on the manufacturer’s design and which cycles you pick to run.

Multiple settings for soil level and the kind of dishes you put in will influence parameters like the water pressure and amount of water.

There is one more option of heated drying, which actually doubles the base electrical cost to generate another round of heat.

So, your mileage may differ, but if we use the average consumption rates it’s possible to get an idea of how much the dishwasher adds to your monthly utility bills.

Tips for saving Money When Using Your Dishwasher:

There are some ways by which you can cut down the amount of money you spend on energy for your dishwasher and other kitchen appliances. Just follow the tips to keep your power usage to a bare minimum:

To erode the number of cycles you run in a week you can put up a full load of dirty dishes before your run your dishwasher.

Avoid over-filling the dishwasher, either, as the water requires space to flow for the process to work functionally.

When the cycle completes and dishes are hot open the door of your dishwasher, which will speed up the evaporation process. And by this way, you can avoid the heated dry setting and use much less energy.

It’s always better to clean your dishwasher regularly to stop the spray arm and filter from blocking with soap scum and food particles, which will minimize productivity and may set back powerful washing cycles.

If possible try to get a new energy-saving model. As we have stated above, modern dishwashers have refined their ability in no time.

When you use the dishwasher during the hottest part of the summer day it generates extra heat in your house. And for this reason,

It will make your air conditioner work that much harder, and this increases the amount of energy you’re using. So, it’s better not to use a dishwasher during those times.

It’s beyond doubt that using a dishwasher actually uses less water as compared to washing dishes by hand, particularly if you have a high-efficiency model.

But sometimes it makes sense to do the job in a more conventional way, for example when you have less than a full load to finish. Try to restrict the amount of time the faucet is running, and you can still come out ahead.

Do dishwashers waste a lot of electricity?

Not really as almost all the latest dishwashers are built to be energy efficient and use around 0.8 kWh per load and this depends on the washing program to heat up the pump and recycle the water in the device.

How much does it cost to run a dishwasher every day?

As we discussed above it doesn’t cost much it costs around $0.189 to run a dishwasher once per day. And if you want to whittle it down it will be around   $1.32 per week and $5.67 per month to run a dishwasher every day. You can say this is for 1 load per day.

Is it cheaper to wash dishes by hand or use a dishwasher?

Does the dishwasher add to the electricity bill?

How many watts does a dishwasher use per hour?

We have tried our best to answer the most common question that people have in their minds. And after going through these details it’s quite clear that it’s not much expensive to use a dishwasher. And now it’s up to you to decide whether you want to use a dishwasher or go for the conventional way.